For a graduate student, access to cutting edge research facilities and instrumentation offers the very real possibility of probing new physics.This new physics knows no boundaries, and the possibilities are limited only by the innovative questions we ask. The universe itself is now a laboratory for the exploration of fundamental physics: recent discoveries have strengthened the connections between fundamental symmetries, the basic forces of nature, and the structure and evolution of the universe. New measurements will test the foundations of cosmology and help determine the nature of dark matter and dark energy, which make up 95 percent of the mass-energy of the universe. Answers to such basic questions about the fundamental properties of matter require next-generation facilities and bold new experimental and theoretical approaches using techniques of complex systems, condensed matter, biophysics, astrophysics, particle, nuclear, and gravitational physics.

Intense synchrotron light and neutron facilities advance our understanding of high-Tc materials and the molecular structure of biological systems. New instruments have provided the means by which researchers have been able to explore regimes of time and space unimagined just a few years ago. Higher energy and intensity accelerators and new astrophysical observatories are planned that will probe nature at extremes ranging from 10-18 cm to 10+28 cm. Femtosecond lasers now examine the making and breaking of specific chemical bonds; and new microscopies, such as atomic force microscopes, are opening up the viewing of individual atoms and molecules.

At UC Davis our students have access to a wide range of physics research facilities that we list below by discipline.

Profs. Maxwell Chertok, John Conway, Robin Erbacher, Mani Tripathi, and Profs. Emeritus Richard Lander and Dave Pellett work at colliders to study fundamental interactions in particle physics. A dozen or so postdoctoral scholars and graduate students are resident at these labs, where they operate detectors and carry out data analysis. The group participates in the following experiments:

The heavy ion physics group of Profs. Daniel Cebra and Manuel Calderon also utilize the CMS experiment, while they continue to work at Brookhaven National Lab:

Prof. Robert Svoboda is involved in measuring neutrino oscillations with the Double Chooz experiment which detects neutrino emissions from two large nuclear reactors. He and Prof. Mani Tripathi are founding members of the LUX dark matter search experiment located at the now defunct Homestake mine, which has an experimental hall at a depth of nearly one mile.

These facilities at UC Davis are very important for detector R&D. The 2 MW TRIGA reactor at MNRC is used for neutron activation analysis in order to radio-assay materials to be usd in low background experiments. The 63 MeV cyclotron at Crocker has been used extensively to study radiation damage effects on silicon detectors and VLSI electronics that are used in collider experiments. The facility for interconnect technology is a recent and unique addition, which is used to develop bump-bonding techniques for detector assembly.

The helium recovery facility, located in the basement of the Physics Building, uses state-of-the-art technology to recover approximately 90% of the helium used for research by the Physics & Astronomy Department. Helium is a non-renewable resource that has become increasingly expensive and difficult to acquire, but is absolutely vital to many of the cutting-edge experiments conducted in the department. The new facility houses three separate liquefiers that can each produce up to 30 L/day. Boil-off helium gas from cryostats located in laboratories on the second and basement floors is collected in a large inflatable bag, and then compressed into storage cylinders. A series of purifiers removes unwanted gases (such as nitrogen and oxygen contaminants) prior to liquefaction. Each liquefier can be separately disconnected from the recovery system and transported to the various laboratories to transfer the liquid helium into cryostats. The system was installed in partnership with Quantum Design, and can operate nearly autonomously.

This facility not only advances green technology, but will save millions of dollars in the long run and insulate the department from wild price fluctuations and uncertainty of a limited supply.

Group members of Profs. Warren Pickett and Richard Scaletter use beam time at the AP to probe phase transitions at high pressure (up to a megabar) in crystalline materials. Examples include identifying the volume-collapse, "Mott" insulator-to-metal transition in the correlated insulator MnO, and identifying structural and vibrational changes in novel magnets and in low-Z compounds that are potential high temperature superconductors.

Prof. Ching Fong uses vpna.llnl.gov to logon to the computing facilities at LLNL. Since 2002, he has been collaborating with researchers at LLNL for designing spintronic materials and understanding the physics governing their properties.


Profs. Marusa Bradac, Chris Fassnacht, Lori Lubin, Tony Tyson and David Wittman use the instruments at the twin Keck telescopes, among the worldâ€™s largest optical and infrared telescopes. Studies involve a variety of astrophysics topics, including dark matter, dark energy, first glimpses of the reionization epoch, and obtain spectroscopic redshifts of distant galaxy clusters. Profs. Tony Tyson and David Wittman use the 4-m telescopes at Kitt Peak and Cerro Tololo to obtain wide-field imaging of the sky, mining science from the Deep Lens Survey. Tyson is also organizing the next digital sky survey for which he is the director:

These sky surveys probe the physics of dark matter and dark energy.Space Based Telescopes

HST is used for high-resolution imaging by Profs. Marusa Bradac, CHris Fassnacht, Tony Tyson and David Wittman. Chandra is used to study X-ray emissions from galaxy clusters, and Spitzer to study their stellar content in the near infrared. 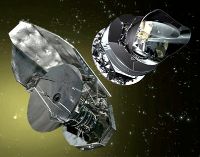 The current generation of cosmic microwave background observatories are putting further pressure on the standard cosmological model, greatly improving our sensitivity to physical processes in the early Universe. Professor Lloyd Knox and members of his group have proprietary access to data from the Planck and Herschel satellites and from the South Pole Telescope.

Prof. Rundle works on understanding phase transitions in complex systems, and applies these models and ideas to understanding systems as diverse as earthquakes and financial markets.

Prof. Crutchfield is also a former Research Professor at the SFI, where he directed SFI's Programs on Complex Interactive Networks, Dynamics of Learning, Physics of Computation, and Evolutionary Dynamics.

Prof. John Rundle is a Distinguished Visiting Scientist at the Jet Propulsion Laboratory, where he works on space-based methods for remote sensing of earth deformation associated with earthquakes.

Prof John Rundle also works with scientists from SCEC, which is an NSF-USGS center, to develop and test simulations and to explore methods for earthquake forecasting.