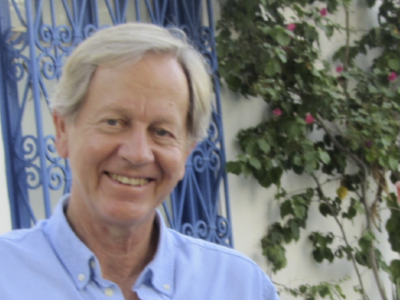 Warren Pickett joined the department in 1997, after spending 18 years in theoretical condensed matter physics research at the Naval Research Laboratory in Washington DC. Much of his research revolves around computational implementations of the density functional approach to understanding electronic behavior at the microscopic level, with applications to some of the most intriguing condensed matter physics questions. The phenomena that are studied include high temperature superconductivity, half-metallic ferromagnetism and antiferromagnetism, materials behavior under extreme conditions (including appearance of high temperature superconductivity), polar discontinuities and confinement effects in nanostructures, and exposition of relativistic effects (from spin-orbit coupling) in condensed matter.

Around 1984, with two collaborators Pickett used the new supercomputer of the time (Cray I, at Boeing) to calculate the electronic structure and Fermi surfaces of the heavy fermion superconductor UBe13, in one of the largest condensed matter physics calculations at the time. In 1987 he calculated the Fermi surfaces of the most heavily studied high temperature superconductor, YBa2Cu3O7, with the predictions confirmed only 2-3 years later. He has demonstrated formally the possibility of single spin superconductivity in a half-metallic antiferromagnet, and provided the explanation for the surprising 40 K superconductivity in MgB2 only four months after its discovery. Computational materials discovery and design has long been a keen interest, and he has published a number of provocative predictions (unfortunately, most remain unconfirmed!). A recent emphasis in his research effort is to extend the widely used electronic structure methods to apply to the most exotic classes of matter, the strongly correlated systems that include Mott insulators and heavy fermion metals.

Pickett's research is supported by Basic Energy Sciences in the Department of Energy, and by the National Science Foundation. Over the past decade he has participated strongly in research teams, such as DOE's Computational Materials Science Network (CMSN) program and Scientific Discovery through Advanced Computing (SciDAC), and NSF's Physics at the Information Frontier (PIF) program. He serves regularly on scientific review boards and advisory committees in the U.S. and abroad.